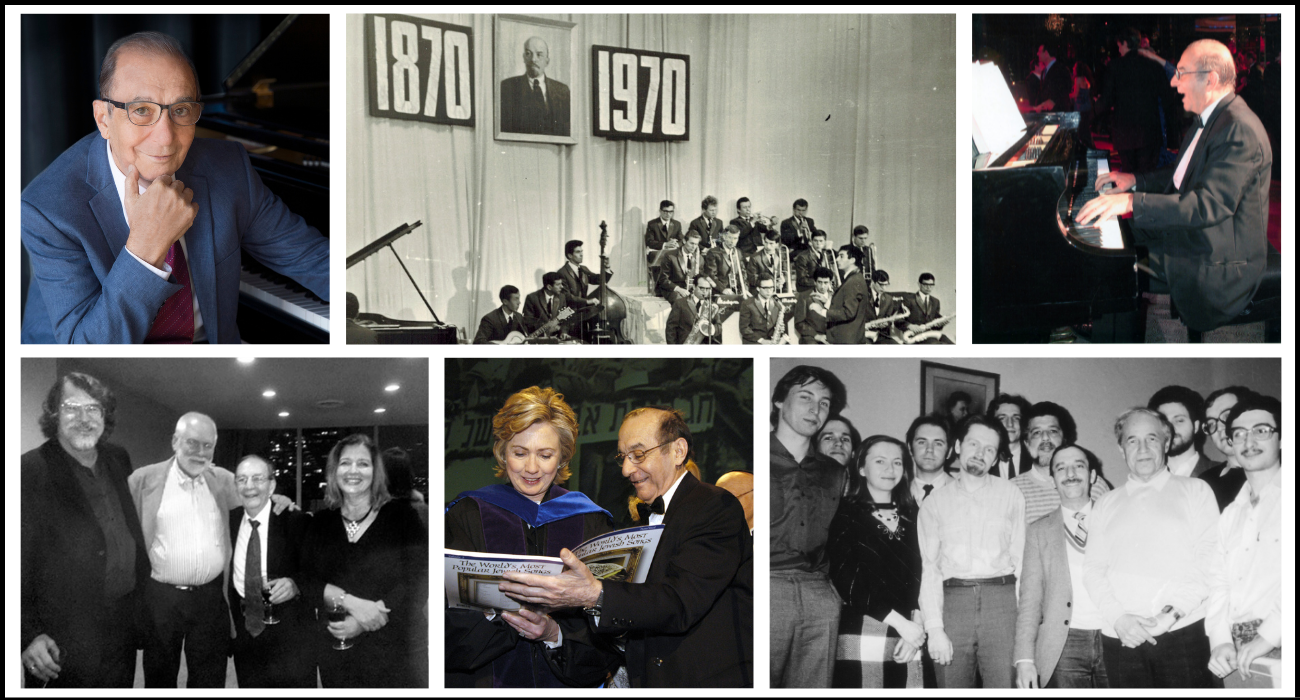 See below for photo credits.

The Gold Coast Arts Center and the music world mark the passing of a master musician and composer, Edward Kalendar, who died on June 11, 2022. Mr. Kalendar was an internationally known musician and composer who lived in Great Neck and restarted his career after leaving the Soviet Union with his family.

Edward spent his early years in Lvov, Ukraine. He received his musical training at the Tashkent and Moscow Conservatories where he studied with albert Malakhov, Boris Zeidman and Aram Khachaturian. Edward became a conductor of the Tashkent Radio Orchestra from 1968-1976. He continued to make regular appearances as a guest conductor of the Orchestra until 1993. Edward was also a music director of the Music Folklore Theater in Moscow from 1991-1994. He achieved widespread popular acclaim as a songwriter, composer, and performer and his music was frequently broadcast throughout the Soviet Union and in Europe.

Edward was one of the underground jazz pioneers in the former Soviet Union. During the 1950s, the appreciation and performance of jazz in the Soviet Union was a dangerous and unpatriotic activity. Despite official disapproval, Mr. Kalendar nurtured his love of the genre by memorizing jazz performances that were broadcast late at night on “Voice of America”. While still a conservatory student in 1964, Mr. Kalendar formed and conducted a clandestine big band made up of fellow jazz enthusiasts. At one point, the Dean of the Conservatory warned him that “practicing a western genre alien to Soviet youth” might have a negative impact on his musical future. Mr. Kalendar continued to lead the band for another six years. He eventually became a leading authority in the genre and introduced it to generations of young Soviet jazz enthusiasts.

“As the founder and executive director of Gold Coast Arts, I was introduced to Edward Kalendar by Aaron Picht, a talented cellist who was donating time to an organization that was helping find placement for émigré Russian musicians. The Great Neck Arts Center (which is today the Gold Coast Arts Center) had just opened its doors in 1995 and he had heard about us from one of our Russian ballet teachers, who had brought her entire ballet school to Great Neck to our fledgling Arts Center and recommended us to Mr. Picht. Edward and his wife Asya came to Great Neck, played on the piano in my home, and brought me to the realization that I was hearing a genius musician and we needed to do what we could to help him rebuild his life and career. We welcomed Edward and his wife to teach at the Arts Center, our first music teachers, as he made contact with those musicians and others in the US who would go on to become important to him in giving him the performance space and support that he needed to perform and compose. Even after he achieved the recognition in this country that he had known in the USSR, he continued to teach his advanced students at the Arts Center. He was remarkable in his loyalty to them and to us.” Regina Gil, Executive Director Gold Coast Arts.

As a result, because he was a master of so many musical genres, including classical, pop, folk, and jazz, he was able to continue his multifaceted musical life. He performed at Alice Tully Hall, Rockefeller Center, the Kremlin Palace Concert Hall, Vail Jazz Festival, Theater Gran Via Madrid, the United Nations, and many other prominent venues.

Mr. Kalendar was also an insightful, dedicated and talented teacher. His classical composition, theory and jazz performance students have earned degrees at the Oberlin Conservatory, Princeton University, Harvard University, the Moscow Conservatory, the Jerusalem Academy of Music, Mannes School of Music, and the Juilliard School, to name a few. Many of Mr. Kalendar’s students have become successful composers, jazz singers, and instrumentalists. Mr. Kalendar’s compositions include twenty-seven film scores; concertos for cello and piano; a violin sonata, a symphonic poem for orchestra; a string quartet; dramatic music for theater; children’s and professional choral pieces and over 200 classical and popular songs. Several volumes of his Jewish music arrangements enjoy worldwide distribution through Schott Music, Barnes and Noble, and Hal Leonard Corporation. “Maestro Edward Kalendar proved himself to be a ‘strong leader’, helping to move Jewish music to a higher level. Edward was a just, kind, and caring neshamah.” Velvel Pasternak, Tara Publications.

Above all, Edward Kalendar loved Life. He demonstrated an almost childlike awe and wonder of the natural world and his place in it. He loved People. He had literally thousands of friends from all faiths and ethnic backgrounds. He was inclusive, welcoming to everyone, and never missed an opportunity to help others. Through his music, he touched the hearts of untold numbers of people. To know him was to love him and his sudden death was a shock to many.

He is survived by his wife Asya, his daughter Elina Picht, son-in-law Aaron Picht, and grandson Sebastian Picht.

Photos courtesy of the Kalendar family.