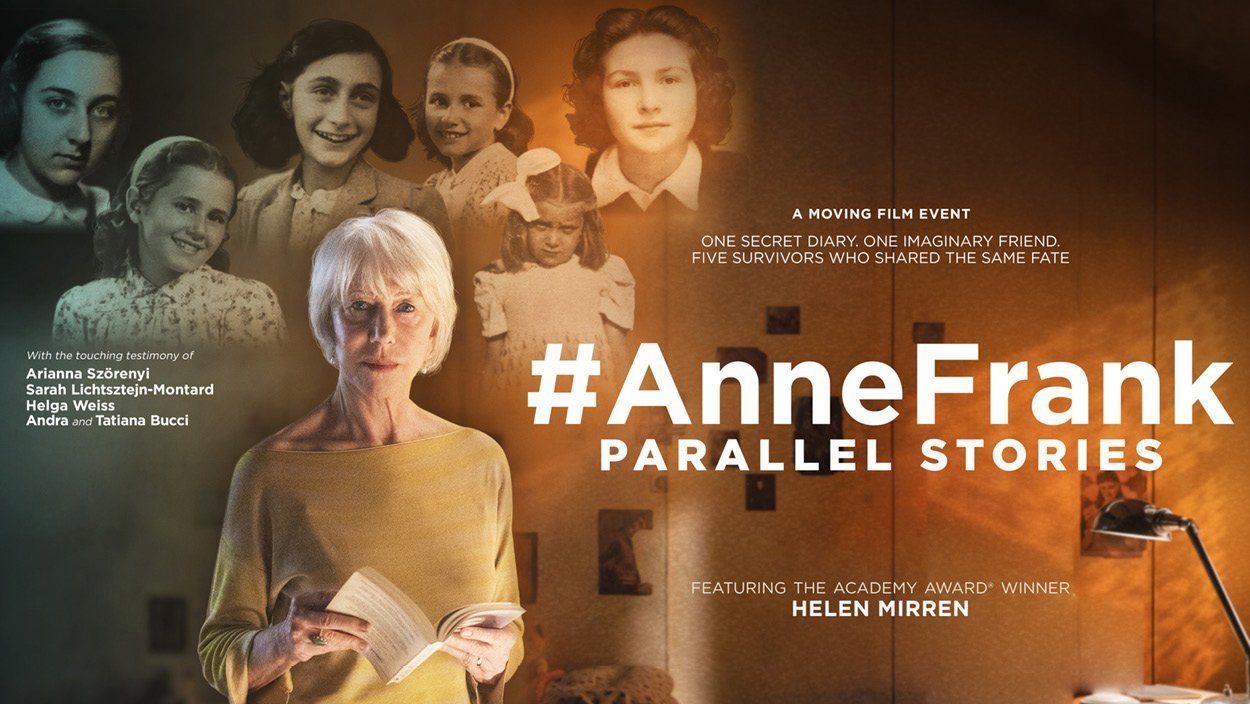 A powerful retelling of Anne Frank’s life through the pages of her extraordinary diary guided by the Academy-Award winning actress Helen Mirren, and through the lives of five women who, as young girls, were also deported to concentration camps but survived the Holocaust.

As a dedication to what would have been her 90th anniversary–and in cooperation with the Anne Frank Foundation–the documentary takes audiences into Anne’s room within the secret annex of her family’s hiding place before being deported, and through read excerpts of her diary intertwined with the experiences of the survivors who lived to tell their own parallel stories. Off “the set”, a girl of today will lead us on a journey to get to know the places that were part of Anne’s short life and her feelings.

MICHAEL BERENBAUM, featured in the documentary, is an American scholar, professor, rabbi, writer, and filmmaker.  A U.S. Holocaust scholar who played a prominent role in what he describes as the “Americanization” of the Holocaust: the transformation of a sacred Jewish memory into a significant part of the conceptual and physical landscape of the American public culture. He is the Director of the Sigi Ziering Institute: Exploring the Ethical and Religious Implications of the Holocaust, and a Professor of Jewish Studies at American Jewish University in Los Angeles. Berenbaum has written or edited 16 books, including After Tragedy and Triumph: Modern Jewish Thought and the American Experience (1990), and The Holocaust and History: The Known, the Unknown, the Disputed and the Re-examined (co-edited with Abraham Peck, 1998). He also served as executive editor for the second edition of the Encyclopaedia Judaica.

MICHAEL S. GLICKMAN is a social entrepreneur and nonprofit executive who has led cultural institutions over the past two decades. During that time Glickman has helped to secure and invest hundreds of millions of dollars in philanthropy for arts and culture, and educational causes. He is Founder & CEO of jMUSE, a new venture in arts and culture philanthropy that brings together institutions, experts, and philanthropists to experiment with new ways to present important ideas and innovative content across the United States and Europe. Prior to founding jMUSE, Glickman served as President & CEO of New York’s Holocaust Museum (Museum of Jewish Heritage), led the Center for Jewish History, and served as vice president at Long Island University. Glickman is the immediate past president of the Board of Directors of the Gold Coast Arts Center and Gold Coast International Film Festival.

Tickets for “#AnneFrank: Parallel Stories” are $10 for Film Society members, and $15 for non-members when purchased in advance. Tickets are $20 at the door. All tickets are subject to a $1 ticketing fee. No refunds or credits.