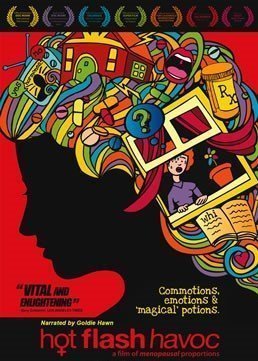 Get ready to laugh – and learn – with GCIFF and the Katz Institute for Women’s Health at a special event that uncovers the truth about something women love just love to talk about (wink wink) – menopause.

Join us as we watch the award-winning film Hot Flash Havoc, learn from a distinguished panel of experts from the Katz Institute for Women’s Health and laugh with comedy star Sherry Davey as she does her stand-up routine.

ABOUT THE FILM: Hot Flash Havoc is a provocative, enlightening, entertaining and revealing documentary that offers audiences a crash-course in menopause. With poignant stories shared by real women and in-depth interviews with some of the world’s most noted experts, this film has the power to be a life-changing experience, and redefine what you thought you knew about “the change.” Narrated by Goldie Hawn, this film not only sheds insightful light on the confusion stemming from a decade of misguided facts, but provides compelling information about menopause that will empower women for the Second Act of their lives.

Sherry Davey is a mother of two daughters aged 20 (God help her) and 14 and a professional comedian, writer and actress. She’s appeared on NickMom’s NICKMOM NIGHT OUT and NICKMOM ON and also created, wrote, produced and starred in her own digital series for Nickmom called “Real Housewives Of The PTA”. Sherry has appeared on GOTHAM LIVE and TV Guide Channel’s STAND UP IN STILETTOS. Other credits include: Nick At Nite’s SEARCH FOR THE FUNIEST MOM IN AMERICA Seasons 1 & 2; Comedy Central’s TOUGH CROWD WITH COLIN QUINN and PREMIUM BLEND; Tru TV; NBC’s THE TODAY SHOW; and Fox News Channel. Sherry is also a well-known comedy writer in the industry and has written for many TV shows. For several years, Sherry was the official FUNNY MOM Blogger at NBC’s Momtourage.com. Sherry is also a featured columnist in the nationally distributed magazine : HYBRID MOM. She has performed two years in a row at the Amman Stand Up Comedy Festival in Amman, Jordan. She performs at casinos and comedy venues around the country and has been honored as one of the Hollywood Reporter’s Magnificent Seven.She appears regularly in NYC at: Gotham Comedy Club; Broadway Comedy Club; The Comic Strip; and Stand Up New York. Sherry is also the mother of an autistic child.

Q&A PANEL TO INCLUDE:

Sponsored by: Katz Institute for Women’s Health at Northwell Health