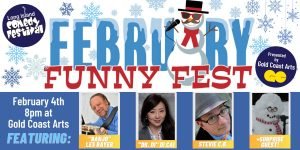 8:00 pm
Tickets
By popular demand…The Long Island Comedy Festival returns to GCAC! Join us for another evening of laughter and fun as we present February Funny Fest at Gold Coast Arts Center! Headlining the Funny Fest is[...]
February 2023 Feb 2023

Join us for another evening of laughter and fun as we present February Funny Fest at Gold Coast Arts Center! Headlining the Funny Fest is “Banjo” Les Bayer, Di Cai “Dr. Di” , Stevie C.B. and a special surprise guest comedian too! Showtime is 8pm and doors open at 7:30pm.

“Banjo” Les Bayer –
Les’ hilarious banjo songs and quick one-liners are always crowd pleasers.  Les is a regular at resorts in the Catskills and has been featured in Atlantic City, at Mohegan Sun and top venues around the country.  A throw-back to an older style of joke-telling that seems new today.  “Banjo” Les was also the winner of the AARP Search for the Next 50+ Comedy Star a few years back, where he beat out over 200 contestants across the country!

Di Cai  “Dr. Di” –
Di Cai is a regular at top comedy clubs in NYC.  Stand-Up NY, Gotham Comedy Club, Caroline’s NYC.  Originally from China, Di now lives in NYC full time.  Her unique style and perspective leaves audiences wanting more.  Di made her debut this past summer in the 16th Annual Long Island Comedy Festival and wowed audiences with her hilarious material.  Be sure to follow this yound comedian so you can tell your friends you “saw her when”.

Stevie G.B. –
Stevie is known as “The World’s Funniest Accountant” due to his prior career before launching into comedy full-time.  He’s one of the most requested comedians on Long Island and is tireless. Stevie performs constantly at top venues, 50+ communities, Comedy Festivals and more.  His dry delivery, sarcastic attitude and incredible comedy material brings audiences to a level of hysteria few comedians can accomplish.  Stevie is one of the most consistent comedy writers, always bringing new and fresh material to his performances.

**Masks are recommended for this indoor event.